Drunk driving is a serious problem in Tucson, but the penalties for DUI often do more harm than the act itself.  Arizona DUI laws have become so strict that DUI penalties can derail a person’s entire life.  That’s why it’s so important to at least consult a good Tucson DUI lawyer if you’ve been charged with driving under the influence.  Even a first-time DUI conviction, without any accidents or bad driving, can leave someone with massive fines, a significant jail sentence, and no transportation.  DUI enforcement in Arizona is also very strict, often resulting in arrests of people who are not really driving under the influence.  One problem is that there is no way for the average person to tell if they have had too much to drink before driving, or if the medication they’re taking will subject them to criminal penalties.

If you have been charged with a DUI, you need serious legal representation.  At the very least, you should consult with an experienced Tucson DUI lawyer before making any decisions about your case.  You deserve to have all of your questions answered so that you fully understand your situation and can make informed decisions about how to proceed with your DUI case. 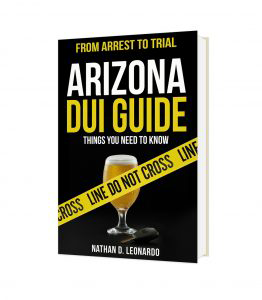 It’s important to take some time to educate yourself about Arizona DUI law and defenses to DUI charges.  We are convinced that many people end up with criminal convictions for DUI in Arizona because they were never fully aware of their options.  In our effort to educate Arizonans about our DUI laws, we are offering a free copy of the Arizona DUI Guide for a limited time — just click on the book above and enter your information — we’ll send it to you at no charge.

If you are interested in hiring a lawyer to help you fight your DUI charges, or if you’re trying to decide whether you even need to hire a lawyer, you may be confused by what you find on the internet.  We have created a free consumer guide that cuts through the clutter and provides all the information you need to make this important decision.  To download this guide, click on the book below: 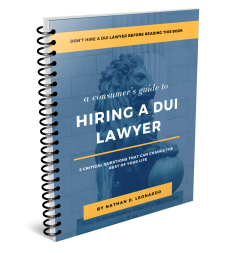 At Leonardo Law Offices, we believe in providing prospective clients with free information before they make the important decision to hire an attorney.  We have successfully handled hundreds of DUI / DWI cases in and around Tucson (Tucson City Court, Pima County Justice Court, Federal District Court, Marana Municipal Court, Oro Valley Magistrate Court…).  Many of these cases have gone to trial, many have been dismissed based on motions to suppress evidence, and many more have been resolved with a plea agreement to reduced charges, including reckless driving.  We work with expert witnesses to challenge both breath test and blood test results.  We not only defend our clients from their DUI charges in court, but we represent our clients in front of the Arizona Department of Motor Vehicles (MVD or DVM) in an effort to protect their driver’s licenses where possible.

Consult the following links for more information about Arizona Criminal and DUI laws, as well as local court information: