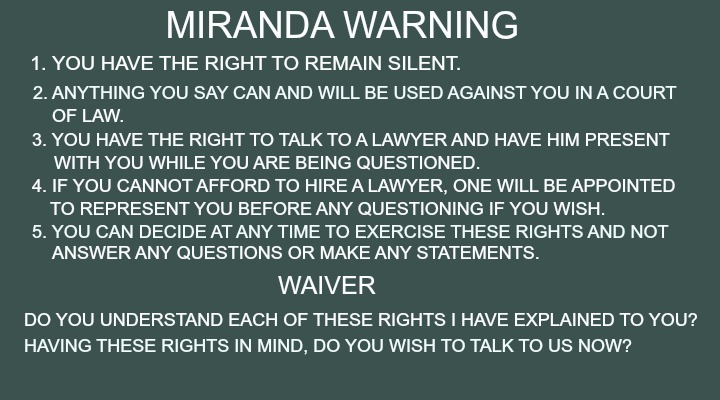 One of the most common questions I get as a criminal defense attorney is “what happens if the police didn’t read me my Miranda rights?”  Many people are under the mistaken impression that if the police didn’t read them their rights, then their charges will be dismissed.  That’s not the way it works.  A police officer is free to ask you questions and you are free to assert your right to remain silent at any time.  Under Miranda v. Arizona, a police officer is only required to read you your rights prior to custodial interrogation.  This means that two circumstances must occur simultaneously:

So what happens if the police don’t read you your rights under these circumstances?  The case doesn’t get dismissed, but any statements you made should be suppressed.  In other words, the statements cannot be used as evidence against you in court.  Obviously, this only helps you if you made an incriminating statement in the first place.  While this can certainly increase your odds of a successful defense, the government will still probably have enough additional evidence to continue prosecuting the case.  In addition, even if your statements are suppressed, they can still be used to impeach you if you choose to testify and your testimony is inconsistent with the suppressed statements.