The consequences of drug possession in Arizona depend on the facts and circumstances of each case. Simple possession of a drug is treated more leniently than charges of possession for sale in Arizona, but it can still carry some stiff penalties.

Simple possession, or possession for personal use, is the least serious type of drug charge. It is usually charged as a Class 4 felony. A Class 4 felony normally carries a potential sentence of between 1.1 and 3.75 years, but a sentence of probation is mandatory in simple possession cases unless it is the third conviction for a drug-related crime. The judge even has the option of designating the crime as a Class 1 misdemeanor for first offenses.

Probation in these cases always includes a of drug treatment program, which benefits everyone by directly addresses the underlying problem — drug addiction — and thereby helps prevent future drug crimes. It is also far less expensive than putting someone in prison.

However, if you possess a drug in an amount over the statutory thresholds below, you are facing a mandatory prison sentence. 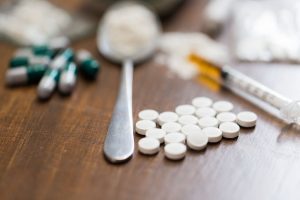 If you do possess an amount over the “threshold”, there’s also a good chance that you will be charged with possession for sale or possession with the intent to distribute, which is a more serious crime that carries a more severe sentence. Possessing these amounts will lead to a presumption that you intend to sell the drug.

Possession Of Methamphetamine In Arizona

Possession or use of methamphetamine in Arizona is treated much more harshly than possession or use of other drugs. This offense cannot be designated as a misdemeanor and probation is not mandated. Instead, the maximum sentence for a first time offender is 3.75 years in prison. With a prior felony conviction, there is a mandatory sentence of between 2.25 – 7.5 years in prison. With two prior felony convictions, this range rises to 6 – 15 years in prison! And that’s assuming the amount of meth involved is less than 9 grams.

Possession Of Marijuana In Arizona

Possession or use of less than two pounds of marijuana in Arizona is normally charged as a Class 6 felony. Cases involving very small amounts of marijuana are sometimes charged as a Class 1 misdemeanors. Class 6 felonies are punishable by up to 2 years in prison, but Arizona law requires a sentence of probation for first-time offenses. If you violate or reject your probation, however, a prison sentence could be imposed. If charged as a misdemeanor, the maximum sentence is 6 months in jail, a fine of up to $2500.00, and up to three years of probation.

Hiring A Lawyer For Charges Of Drug Possession In Arizona

Like drug addictions themselves, criminal drug charges can have major negative repercussions and can change a person’s life forever. If you or someone you know has been charged with a drug crime, it is essential that you have adequate legal representation to attack the charges from all possible angles. There are defenses that may apply, depending on the facts of each case. There are also many constitutional challenges that can be made involving searches and seizures, illegally obtained statements, and poorly executed investigations. If nothing else, an experienced Arizona drug lawyer can ensure that you are treated fairly and, if necessary, sentenced fairly.

If you, or someone you know is facing conspiracy charges in Arizona, we can help. Call for a free, confidential case assessment at 520.314.4125 or contact us online.