In Arizona, if you are charged with a crime and the alleged victim of that 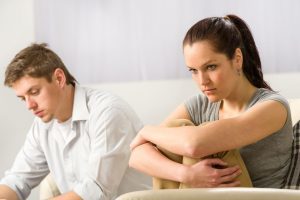 crime is your spouse, your partner, a member of your immediate family, a roommate, or even someone you’re dating, you can be charged with “domestic violence”. “Domestic violence” doesn’t just apply to violence against women; men can also be victims. Actual “violence” is not always an element of “domestic violence” charges. The underlying crime could be as minor as misdemeanor disorderly conduct or criminal damage. As a domestic violence lawyer, I have seen many domestic violence charges that should never have been brought to court. Unfortunately, in Tucson at least, you usually have to go to trial to be cleared.

While domestic violence laws are intended to address a serious issue in our society, too often they are applied inappropriately. You could have an argument with your spouse, your sibling, your parent, or your child, for instance, and be charged with domestic violence/disorderly conduct. Although nearly everyone has engaged in this type of behavior at some point in their life, it will still usually result in criminal charges if the police are called.

What If The Alleged Victim Wants To Drop The Charges?

The consequences of Arizona domestic violence charges can be severe and can reek havoc on a family. When police in Arizona are called to a domestic violence incident, they will usually take at least one of the parties involved to jail. Sometimes, both parties to a domestic dispute are charged with domestic violence. The Department of Child Safety may also be contacted when children are involved, leading to another separate investigation.

When the alleged victim eventually understands all of these consequences, he or she often wants the case dismissed. Unfortunately, prosecutors rarely dismiss these cases voluntarily, even when the victim does not wish to press charges. The State will almost always continue to prosecute the case without the victim’s cooperation. However, all crime victims have rights under the Arizona Constitution. If you are a domestic violence victim and feel like the prosecutor is not listening to you, you can hire your own lawyer to represent you as a victim in the case. A lawyer can assert your victim’s rights, ensure that your position is heard and fairly considered by the prosecutor, and advise you regarding your testimony in court.

What About Domestic Violence Diversion?

Diversion programs are different in every court. In Tucson City Court, for example, you have to plead guilty to a diversion plea agreement. This means that you have to admit to the offense and if you don’t successfully complete diversion you are automatically convicted without any chance to defend yourself.

In Pima Count Justice Court, on the other hand, you don’t have to plead guilty. Instead prosecution is stayed pending completion of the program. If you do not successfully complete the program, then you can still defend your case. However, the county requires you to submit a diversion application in which you must admit your offenses. If you are later kicked out of the program, the State can use this admission against you in court.

Why You Need A Domestic Violence Lawyer